Owning more than half of the world’s most high-demand original content, Netflix is winning the streaming battle worldwide (Parrot Analytics). But in Vietnam, according to Decision Lab’s Connected Consumers Q1 2021 report, Netflix still has a long battle to catch up with YouTube and local streaming platforms and services. The streaming giant’s recent localization efforts and increasing favorability among Gen Z viewers show that its path to dominating the streaming market in Vietnam is bright but long-winded.

The modern viewers in Vietnam have multiple options when it comes to streaming services and platforms. On the one hand, they may catch up on the latest movies, TV shows, and TV series using traditional TV or digital offerings such as FPT play, VTV go, K-plus, etc.

On the other hand, multiple television programs have made themselves available on international platforms such as YouTube or Netflix. On these platforms, Vietnamese viewers can enjoy not only domestic programs, but also their favorite television shows, movies, and series from foreign entertainment industries, such as Korea and the US. 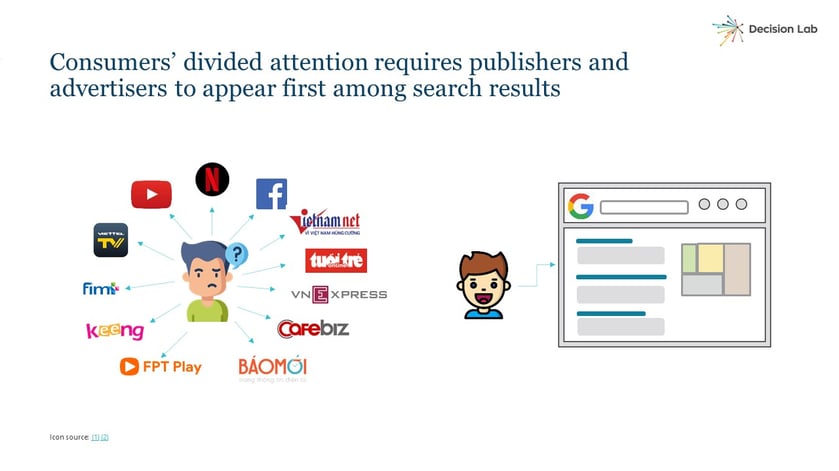 Chief among these streaming platforms and services is YouTube, the reigning go-to platform for media consumption across music, video, movies, etc. The Connected Consumers Q1 2021 report by Decision Lab demonstrated that 64% and 52% of the participants identified YouTube as their platform-of-choice for music and movies streaming respectively. Comparatively, only 19% of the participants regularly watch movies on local platforms.

Despite its global success, Netflix cannot even break into the top 3 platforms that Vietnamese think of when they want to watch a movie. While Gen Z consumers appeared to be the most receptive to Netflix with 11% of surveyed participants saying they most often watched movies on Netflix, this platform is only popular among around 4-7% of consumers in other generations.

In fact, Vietnamese tend to search up their favorite movies on Google more than they do Netflix. This may be due to the fact that in the Vietnamese market, there exist some free, though illegal, alternatives which can quickly surface via Google.

Among paid services, Netflix occupies 16% of the market, placing it as the second largest player behind FPT Play at 23%. As noted in Decision Lab’s report, Netflix stands out to its paying customers due to its extensive catalogue of foreign programs and world-class in-app experience. 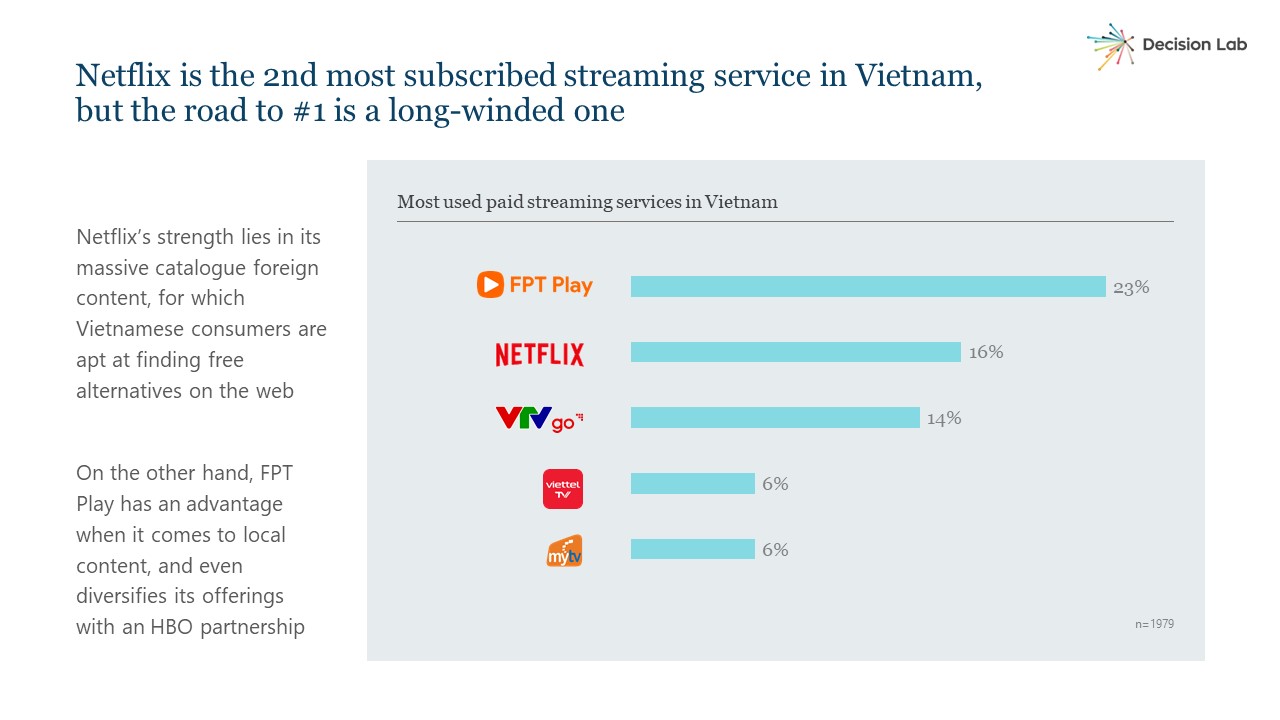 However, Netflix struggles to grow its population of roughly 1 million paying customers (according to campaignasia.com). The general Vietnamese audience may be reluctant to join Netflix due to the platform’s relatively exorbitant subscription fees of VND180,000 to VND360,000. Unsurprisingly, various forms of potentially illegal workarounds (e.g, account sharing) in response to these high prices constitute additional hurdles for Netflix.

Despite setbacks, Netflix has ramped up its localization efforts for the Vietnamese market. Korean, Chinese, and Vietnamese movies make up an increasing portion of Netflix’s offerings, besides the typical US and UK programs.

These efforts have paid off, since Netflix has seen a whopping 60% increase in its user base ever since the start of 2020. The younger generations of Vietnamese consumers are also more willing to endorse the premium content that Netflix offers, while eschewing local alternatives, with 12% of Gen Z participants reported using local platforms for watching movies in Q1 of 2021, compared to 31% of the same period last year. Netflix still has a long way to go in conquering the Vietnamese market. While the digital platform solves its long list of problems (some of which concern the Vietnamese central government), Netflix may benefit from the recent pandemic-boosted digital growth, the shifting Vietnamese consumers’ preferences, and its own efforts to offer more local-friendly content. Regardless, Netflix’s battle in the Vietnamese market remains one worth watching.

For more insights into Vietnam’s social media and mobile app landscape download Decision Lab’s FREE Connected Consumer Report for Q1 2021 for here. For a consultation about how your brand can tap into this market, reach out to one of our expert consultants today.

Decision Lab is pleased to announce that it has entered a data partnership with Statista, thus combining Decision Lab’s ...
Start Reading
Jon Aspin

How E-commerce brands fared during the fourth wave

One of the most prominent recent trends in Vietnam’s retail landscape has been the shift to online and e-commerce. This ...
Start Reading