Although experts predict a consolidation of Vietnam’s e-wallet market over the next five years, until then, competition among players is expected to run hot. As a result, it's become important for providers to understand Vietnamese consumers' individual wants and needs at a granular level.

A recent report by Decision Lab confirms that reward points, in-app promotions, consumer confidence, and merchant availability are still among the top reasons considered by Vietnamese users when choosing an E-wallet.

Users have similar motivations and needs in general

Asked to select all of the factors they used as triggers for consideration, 66 percent of respondents chose ‘widely accepted at online stores’, 63 percent chose ‘In-app promotions’ and in a clear nod to Vietnam’s preference for brand partnerships with the likes of Zalo and Shopee, 61 percent chose ‘Brand reputation.’ 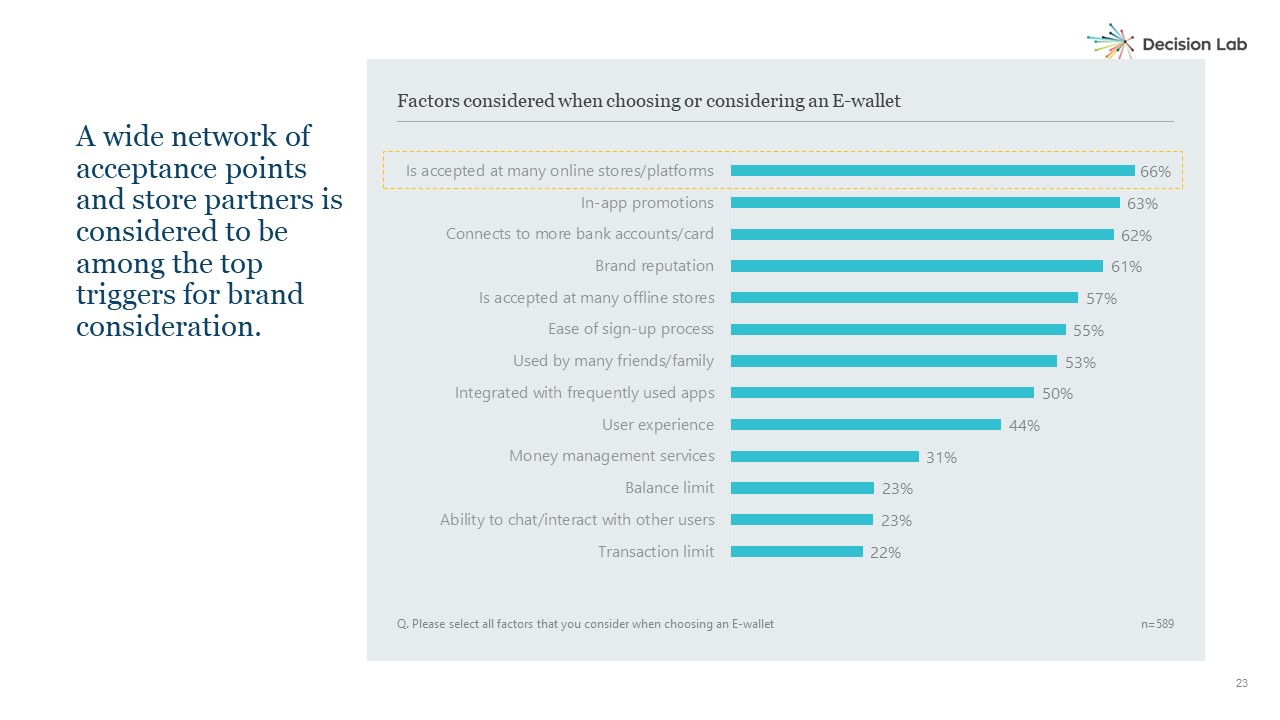 Although the average monthly spend as well as balances remains relatively low (100K VND - 500K VND), encouragingly for e-commerce providers, at the bottom of that trigger list was ‘Transaction limit’ (22%), ‘Balance limit’ (23%), and Money Management Services (31%). 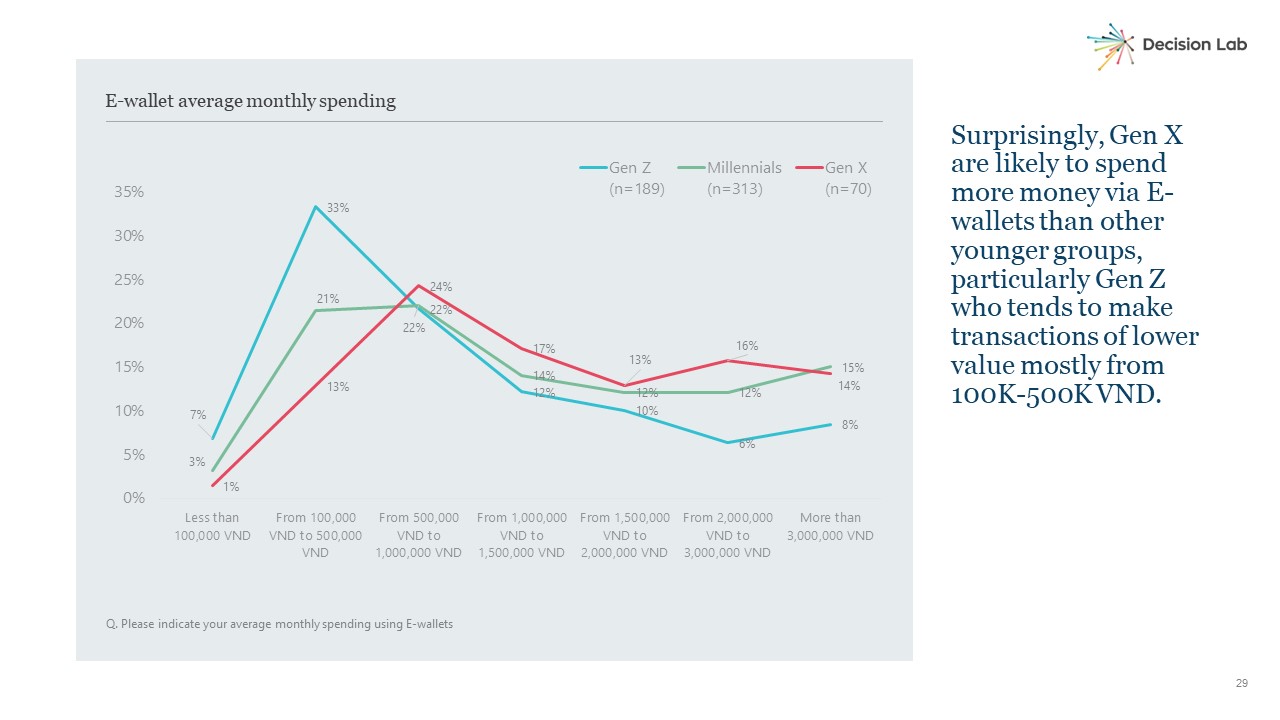 Expected to continue their growth in popularity as Vietnam comes out of its extended period of lockdown, behind ‘familiarity with other methods of online payment’, 25 percent of non-users still cited ‘privacy and security’ as their main reason for not using an E-wallet. ‘Limited ability to connect to their bank account’ was next highest at 22 percent, only marginally above ‘lack of understanding’ at 21 percent. 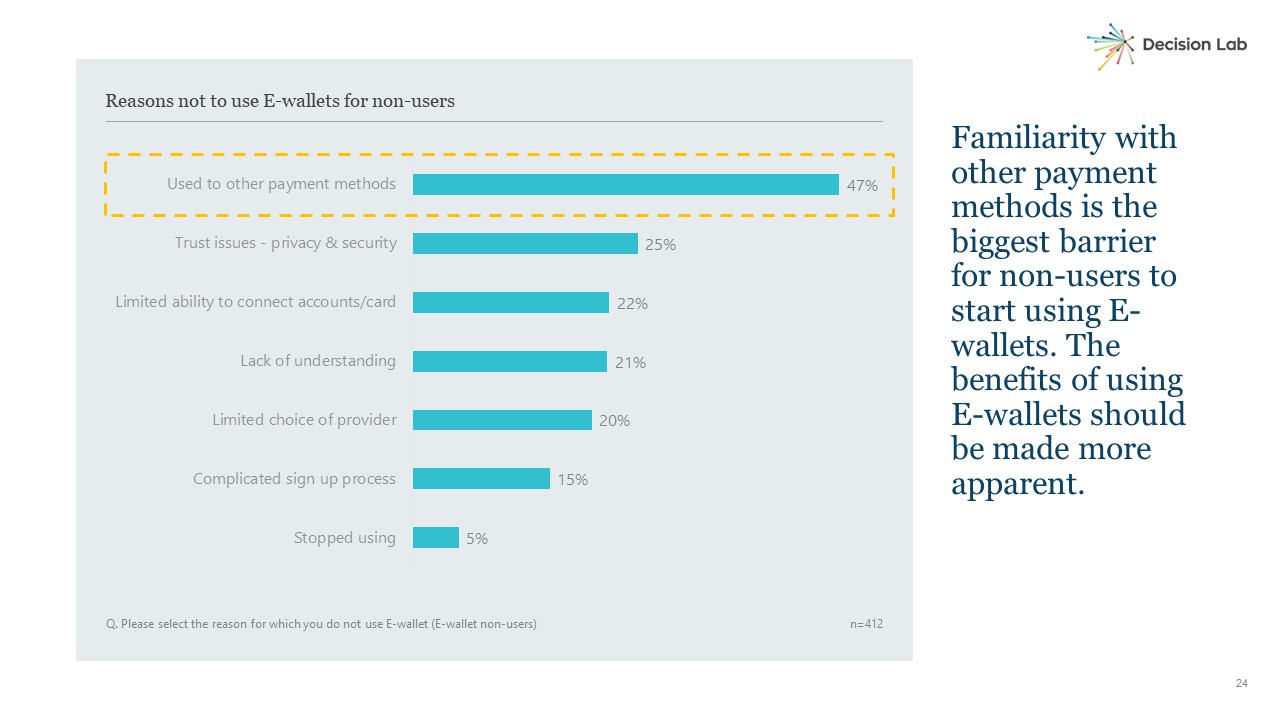 The latter of these reasons points to a clear opportunity for fintech investors to potentially carve out a significant slice of the Vietnamese market simply by educating it.

However, different age groups have slightly different motivations and needs

Among the different age groups, non-users in the Gen X category were most likely to cite a ‘lack of understanding’ to explain their non-use at 32 percent, while only 13 percent of Gen Z non-users gave the same reason. 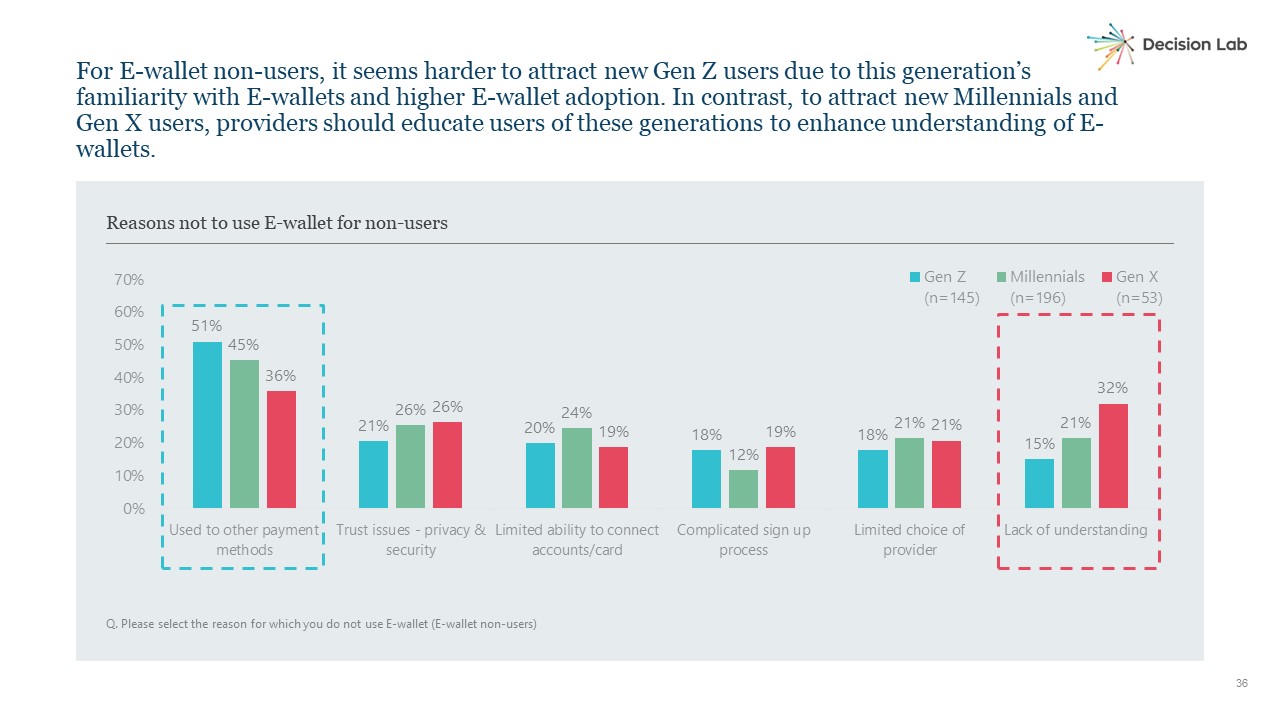 Asked to indicate the main source of influence that would convince them to start using an E-wallet, 46 percent of Gen Z respondents said family & friends, 44 percent of Gen Y said the same thing, while 40 percent of Gen X were most influenced by the availability of in-app purchases from the likes of Grab, Shopee and Zalo, which many Gen Xers use as their primary messaging app. 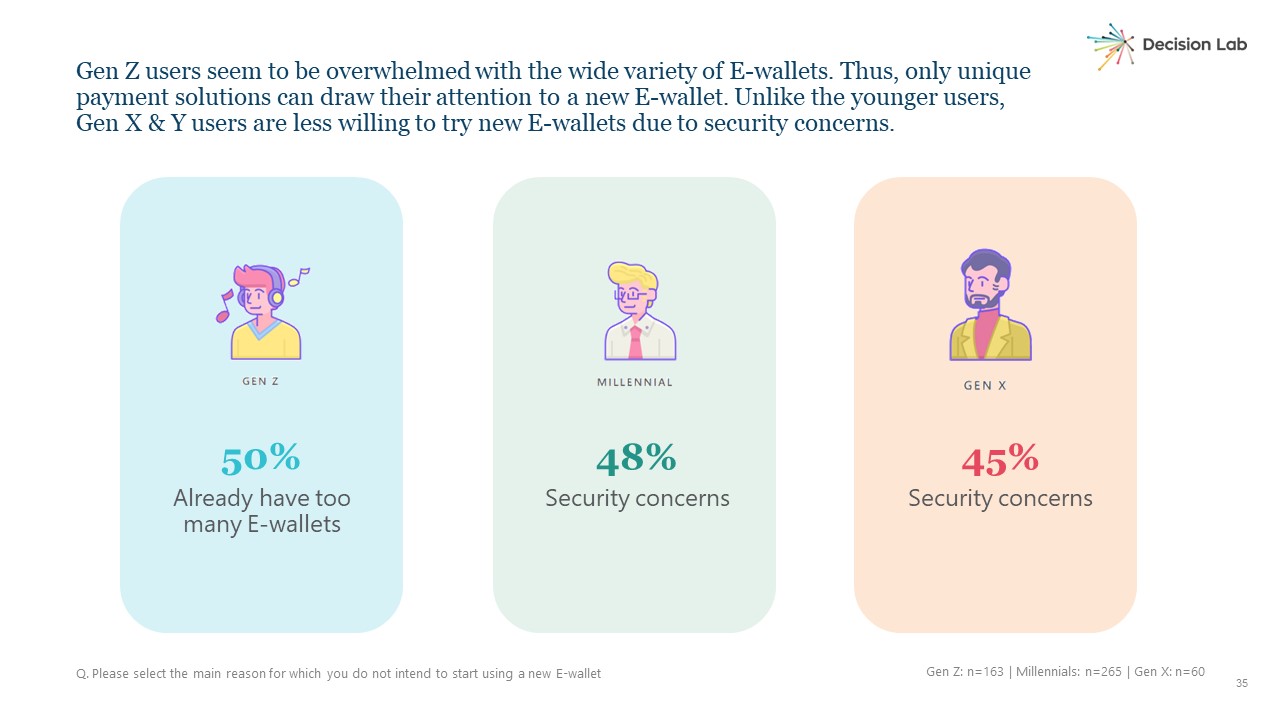 For those already using E-wallets, frequency of promotion was an important reason to continue, as was E-wallets ability to be used at a wide variety of locations. Given the fact that older Gen Xers are more likely to be using E-wallets for a wider variety of purposes, including bill pay, this group had the highest response (80%) in this category. 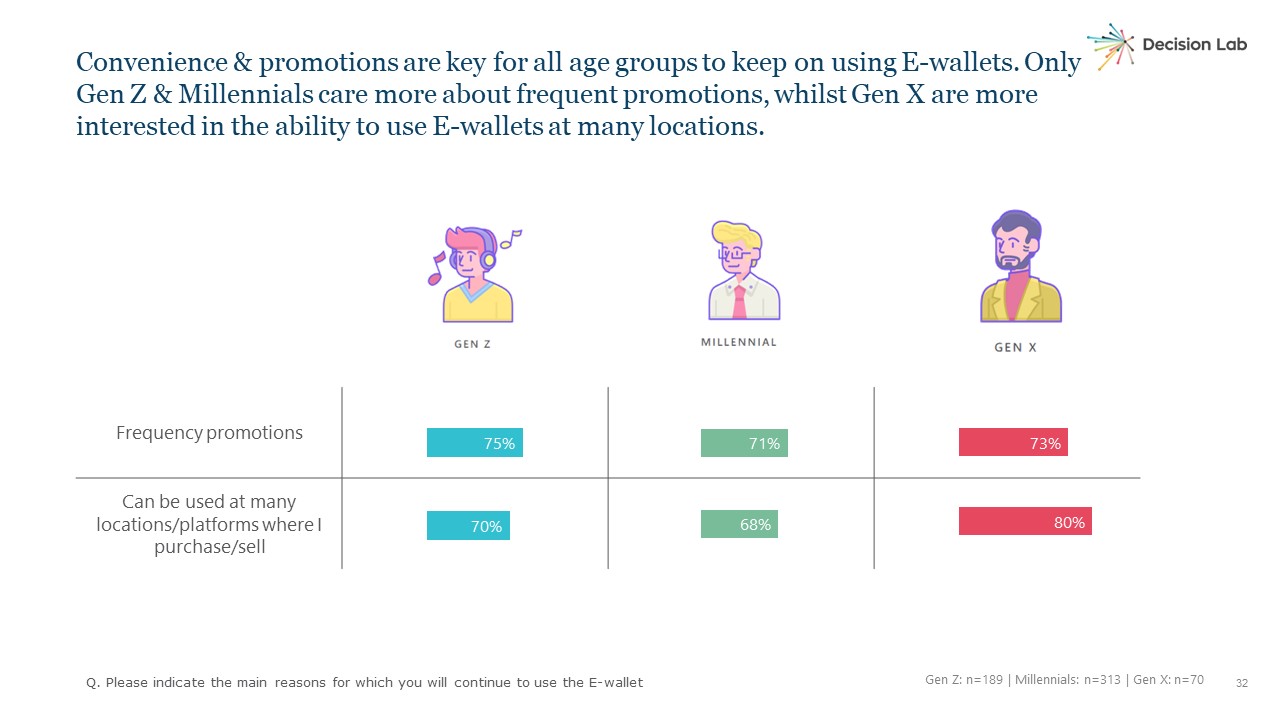 When considering location, it was urban dwellers in both Ha Noi and Ho Chi Minh City who were most likely to suffer from ‘app fatigue’ and be unable to differentiate between E-wallets. At the same time, users outside of the two biggest cities were likely to have more doubts about their E-wallets interface and questions about its security.

Urban dwellers were also more likely to value fast transactions and multiple functionalities, while those from outside Ha Noi and Ho Chi Minh City chose E-wallets as a means of easily transferring money from family or friends and gaining access to in-app promotions.

For more insights into Vietnam’s E-wallet landscape download Decision Lab’s FREE report on "The rise of E-wallets in Vietnam" here. For a consultation about how your brand can tap into this market, reach out to one of our expert consultants today.

Demystifying the rise of E-wallets in Vietnam

Fintech has been receiving much buzz on the Vietnam tech scene. More specifically, digital wallet payment methods have been in ...
Start Reading
Thach Huynh

3 quick facts about E-wallets this Tet

Decision Lab is proud to update our well-received "The rise of E-wallet in Vietnam" report, which was published in October ...
Start Reading
Thach Huynh

Vietnamese consumers are going back to pre-pandemic levels of usage and preference for different social media apps in the first ...
Start Reading