An extended period of physical lockdown during the second quarter of 2021 has seen Vietnamese social media users increase their presence on their favorite apps and return to familiar ones for lockdown relief.

All of the major platforms, including favorites Facebook, Zalo and YouTube have either maintained or grown their popularity during the latest survey period.

TikTok’s increase was noticeable, climbing to 42 percent from 37 percent in Q1. More people got back on Twitter, and 9 percent of people said they’d been active on professional networking site, LinkedIn.

Pinterest, which bills itself as a platform for ‘visual discovery’ also enjoyed a resurgence. It gained 6 percentage points to hit 25 percent in Q2 as more people looked for recipe, home-workout and travel inspiration.

Unsurprisingly, Vietnam’s most popular way of watching music and entertainment videos, YouTube, continued to recover lost ground. Eighty-six percent of respondents said they had been on the platform during Q2, up from 77 percent in Q1. Vietnamese singer Son Tung M-TP has been one artist to benefit from the extra attention. His channel, which he uses to release new music videos, passed 9 million subscribers during the quarter. This makes him the first Vietnamese singer to reach such numbers on YouTube, which has enabled him to maintain several lucrative brand deals.

Other successful creators like @linhbarbie have kept "TikTok-ing" from home, providing a micro-dose of escapism and hope for a legion of young fans. The popularity of slice-of-life TikTok entertainers like @linhbarbie, who provide a micro-dose of escapism, has also grown exponentially during the pandemic. (Source: @linhbarbie's TikTok page)

Instagram’s popularity as a means to #turnbacktime also saw it hit 50 percent for the first time in this category of the Connected Consumer Report.

Stuck in lockdown, many have been taking to its ‘Stories’ tool to indulge in nostalgia from previous travel, share their ‘pandemic survival tips’ and reminisce on not-possible gatherings with friends. Influencers like Supermodel Ha Anh Vu have continued to keep in touch with their fans and promote brands from lockdown. (Source: Ha Anh Vu's Instagram page)

Overall, social media use grew across all age groups, but it was Gen X and Gen Y who were most likely to have increased the amount of time they spent engaging with multiple platforms. 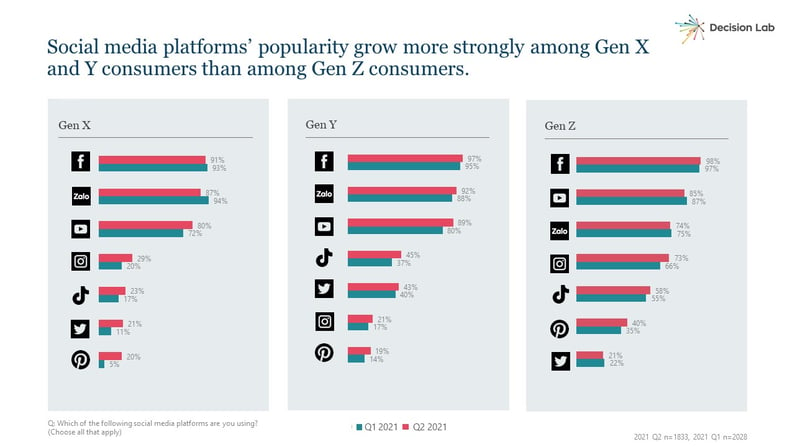 According to Decision Lab’s mobile survey results, it’s been these two groups driving the increased take up of apps like TikTok, while also returning to old favorites like Instagram, where their accounts may have stood dormant for a while.

Strict lockdowns and work from home orders during the second quarter of 2021 have forced Vietnamese consumers online. The ...
Start Reading
Jon Aspin

The end of lockdowns in the third quarter of 2021 in Vietnam has resulted in a reduction in the amount of time spent by users ...
Start Reading
Thach Huynh

How E-commerce brands fared during the fourth wave

One of the most prominent recent trends in Vietnam’s retail landscape has been the shift to online and e-commerce. This ...
Start Reading